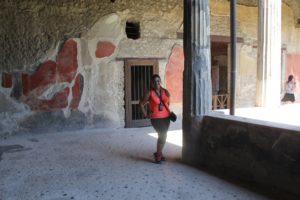 Once a sophisticated Roman city, Pompeii was buried in meters of ash and pumice after the catastrophic eruption of Mt. Vesuvius in 79 C.E. Near the coast of the Bay of Naples, the site features excavated ruins.

It was a thriving provincial center with a population of between 10,000 and 20,000 people. Its narrow streets, made narrower by street vendors and shops with jutting cloth awnings, teemed with tavern goers, slaves, vacationers from the north. A colossal new aqueduct supplied running water from the Lower Apennine mountains, which gushed from fountains throughout the city, even in private homes.

It was a wonder to visit this site on August 1st.  An exhibit of bronze statues throughout the site added an extra visual appeal to the unbelievable breathtaking ruins. 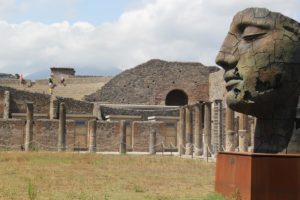 Visiting the Cathedral of Saint Domnius